skip to main | skip to sidebar

No, not the software, me! I missed Friday and almost missed today.

But the truth is, for the moment, I have nothing interesting to tell you. I'm slogging my way through the first chapter of Unbridled, using some old stuff, adding lots of new stuff. My progress is slow but reasonably steady and I'm hoping with a little luck and lot of stamina to have the new first chapter completed by Wednesday. I'm hoping things will come easier after that (famous last words).

So, what are you up to this week?
Posted by Jackie Barbosa at 2:06 PM 2 comments:

And the Winner Is...

Which is a good thing, because I have to admit, it's my favorite of the bunch, too. Not to say I disliked any of the others, but I feel like Unbridled has the most punch from a standpoint of being both unique and hitting on multiple story aspects simultaneously. (This is a hot romance--or I like to think so, anyway--so the double entendre works pretty well.)

So, Bill and Tessa now get to duke it out over the prize. However, since Tessa went to National and may very well have a signed copy of the book in question (or so many signed copies of books in general as to be utterly out of additional shelf space), I'll offer it to Bill first. Bill, email me at jacqueline at jacquelinebarbour.com to claim your prize!

And thanks to everyone who participated. This was tons of fun! Or it was for me, anyway!

P.S. Maybe we can rewrite the first chapter by vote, too?
Posted by Jackie Barbosa at 12:17 PM 5 comments:

I know I said I'd post this Friday, but, well, life happens.

I've narrowed down the list to the ten I think would work best (in alphabetical order) and now it's your turn to vote. Looks like Isabel, Maggie, Kelly, Tessa, Bill, and Bev are in the running for the prize. (There's one in there that I have to attribute to both Tessa and Bill, since Tessa suggested Unbridled Passion and Bill suggest Unbridled Filly. But I cut it down to one word. So if that one wins, I reckon we'll have to flip a coin for the prize.)

All right, vote away. You can vote by number or the actual name. (And I'm only counting one vote per customer, so stuffing the ballot box won't help ya!)
Posted by Jackie Barbosa at 7:19 AM 19 comments:

As I mentioned on Monday, I have been struggling forever with finding a good title for my first manuscript. It began life with the title Living in Sin, but the feedback I got from contests and other sources was that it was both misleading and a little cliched. After a lot of discussion with the Mavens, I retitled it A Scandalous Liaison earlier this year, but even though I liked the idea behind it, I wasn't sure it completely described my book, and when I pitched it to Elaine Spencer of the Knight Agency at National, the first words out of her mouth were, "Well, it is a little cliche."

So, since National, I've reworked the hero and heroine's underlying motivations and pieces of the story a bit and written a new hook for the book which I hope is sexier and catchier than what I had before. Here it is:

After a disastrous near-marriage to the man who took her virginity but wanted only her fortune, Lady Rosalind Brighton has sworn off men, money, and matrimony. She plans to secure her future by managing her thoroughbred breeding estate. Unfortunately, Society doesn’t approve of a woman running such a business and the former estate manager has absconded with most of her operating capital. Rosalind could gain access to her dowry by wedding one of the impoverished lordlings who regularly pop up on her doorstep, but she prays for a miracle instead.

Her miracle comes in the form of England’s most renowned—and most dashing—racehorse trainer. Determined to uncover a scheme to run horses under false pedigrees, Patrick O’Brien makes Lady Rosalind a tantalizing offer: he’ll lend her his credibility and training skills in exchange for complete control over her horses and half the profits. His plan progresses splendidly but for one complication—the passion that simmers beneath the surface of his every encounter with the delectable Lady Rosalind.

After weeks of smoldering glances and increasingly intimate caresses, Lady Rosalind makes a tantalizing offer of her own: she’ll take him as her lover for the duration of their contract. But Patrick’s an old hand at such indiscretions and he won’t be another aristocratic lady’s plaything. He’ll have Rosalind as his wife or not at all. So begins a battle of wits and sensual temptation, with surrender the greatest prize.

So, now it's your turn. What title would you give this book? What would make you pick it up off a bookstore shelf and turn it over to read the back cover copy? Help! Remember, there's a signed copy of Barbara Pierce's Wicked Under the Covers in it for the poster with the best entry!
Posted by Jackie Barbosa at 2:26 PM 17 comments:

I'm back from Dallas and, wow, what a ride! I had the most incredible time. I also didn't sleep much, which accounts for why I'm still a wreck today.

I got two requests from my pitches, which was nice, though I have to say the best thing about pitching was discovering it's not nearly as intimidating to do when the person sitting there is someone who's sole purpose for being there is to listen to your pitch. It was, oddly, way harder to do it in a hotel room for the Mavens and Courtney, India, Sara, and Tessa (with whom we had a "pitch giggle-fest" on Friday night).

The most useful workshop I attended was presented by Leah Hultenshmidt of Dorchester and an author, whose name I have shamefully forgotten. It was about how you can use title and premise to hook an agent, editor, or reader before they've even read a page. I've always known I have a title problem with A Scandalous Liaison/Living in Sin/Whatever the Heck It's Called and I know I need to fix that before I start actively cold-querying it. To that end, I'll be running a contest later in the week asking for title suggestions. Whoever's suggestion I use (or build upon) will receive an autographed copy of Barbara Pierce's Wicked Under the Covers. But before I can start, I think I need to post you all a short synopsis/hook, because it's awfully hard to come up with the right name for a book you haven't read and know nothing about. (I came up with a slew of great book titles immediately after leaving the session. Too bad I couldn't simultaneously come up with the stories to go along with them!)

For more about my fun, fun times at the conference, hop on over to the Manuscript Mavens blog, where I have a much longer (though by no means complete) post up (today's not usually mine, but Erica and I swapped).

See you Wednesday!
Posted by Jackie Barbosa at 3:16 PM 10 comments:

Yes, I know I'm a few days late. As always seems to happen, it took me longer to right the ship after getting home than I expected. It's amazing how much work a house that's been empty for ten days requires to become livable again!

So, for those who asked, we had a fabulous time in Minnesota. Honestly, I think this was the best vacation my kids ever had in their lives. They went fishing, trap-shooting, and spear-throwing. (Well, the oldest did the trap-shooting and spear-throwing; the younger ones watched.) They saw wildlife galore: deer, a fox, a family of bald eagles, beavers. And they had an entire day at the amusement park in the world-famous Mall of America. Life was good. They're already talking about going back next summer.

The only drawbacks to the entire trip were the mosquito bites (mine are still itching!) and the fact that I didn't write for ten days. The not writing for ten days was particularly horrible because now I'm gearing up to leave for Dallas and the RWA National Conference on Wednesday afternoon, which means not much writing since I've gotten back, either. Instead, I'm thinking about what to wear and whether I should actually pitch A Scandalous Liaison or not, and whether my business cards stand any chance of arriving before I leave.

In view of this lunacy, I leave you now with a few pictures from lovely, mosquito-infested Minnesota. 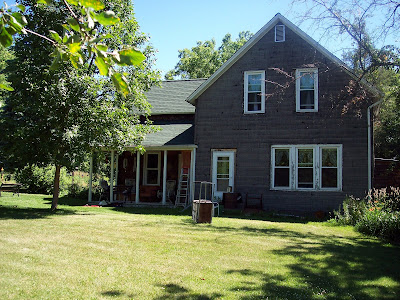 My aunt and uncle's farmhouse 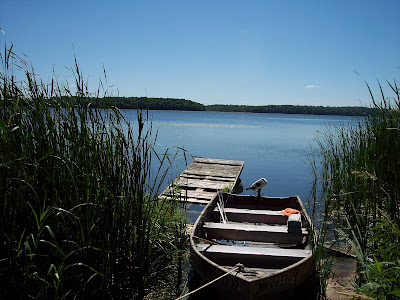 The boat and the lake 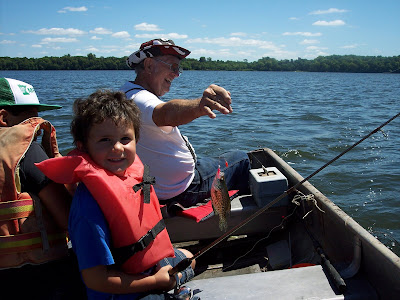 Out on the lake 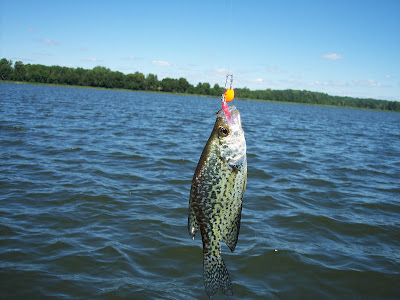 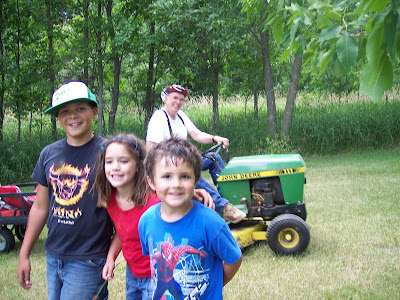 Jackie Barbosa
I'm just an average, married, middle-aged mom of three who has been overtaken by the compulsive need to write historical romance novels.